Yvonne Strahovski is No Serena Joy 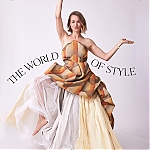 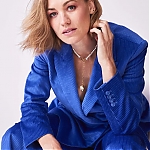 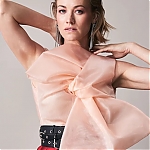 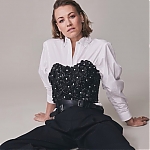 YVONNE STRAHOVSKI arrives on set sporting her signature outfit: a gray T-shirt, denim shorts, and white sneakers. It’s August and the sun is shining in Toronto, where Strahovski, 40, is filming season 5 of “The Handmaid’s Tale.” Barefaced and wearing her blonde hair in its natural texture, she only vaguely resembles her character, the austere Serena Joy Waterford.

The steely demeanor that drives fans to love hating Serena is nowhere to be seen: Strahovski jokes about her lopsided boobs from breast pumping for her son, Henry, who was born late last year. When a spider crawls onto a camera lens, she carries it outside to safety. And she eschews Jimmy Choo heels to be photographed barefoot.

Witnessing Strahovski interact with her newborn son and husband, actor Tim Loden, who visit her at her cover shoot, makes it clear that she deserves her numerous accolades, including two Emmy nominations, for portraying the villainess on Hulu’s dystopian drama series based on Margaret Atwood’s 1985 novel. Now in its fifth season, “The Handmaids Tale” depicts life in Gilead, a totalitarian society in what was once the United States. Ruled by a fundamentalist regime, Gilead treats women as property of the government. Any fertile woman becomes a Handmaid assigned to a Commander and their barren Wife, and is subjected to monthly rape in order to procreate for the couple.

Serena Joy is one of the influential Wives, and as viewers discover, an integral architect of Gilead. Her onscreen husband is Fred Waterford, played by Joseph Fiennes, who was killed at the end of season 4 by their former Handmaid, June, played by Elisabeth Moss. “[Serena] is devastated in her own way about the loss of Fred and then she just gets right back into revenge mode,” Strahovski says about her character’s storyline this season. “We haven’t seen this unhinged version of Serena. She loses her mind and wants to get back at June with vengeance.”

SC: How has Serena evolved throughout the seasons?
She goes from one end of the spectrum to the other, and then sits in the middle in that gray area between good and evil, but never quite makes it to the good side. Which is probably why she’s an interesting character to watch. [Laughs]. Audiences do end up rooting for her, as she and June in past seasons have gotten closer or when she’s shown a friendlier side. Then she just backflips and goes right back into being her true self.

Serena often receives more ire than Fred. Why do you think that is?
It’s a woman against another woman. It’s representative of this hierarchy of women at the top in the political game versus women at the bottom, which is displayed in the wives and handmaids. The dynamic where one woman is supportive of basically enslaving another woman for rape every month for her own benefit.

Is it fun to play a character like Serena who’s very flawed?
Initially it wasn’t, but it’s fun now. It was difficult for me to come to terms with how evil she was at times and try to justify everything because, at the end of the day, it’s my job to humanize her. It’s not like I’m playing a villain for villain’s sake. She’s a woman who is also surviving in a terrible situation.
Initially, when we met her way back in the pilot, she didn’t trust Fred. Fred had obviously had an affair with a previous handmaid. She’s got her own bag of things that have wounded her and traumatized her. I’m not saying that’s an excuse, it’s a platform for a regular person having gone through certain things to turn you into something. Serena’s turned into a bit of a monster and like all characters in Gilead, she is surviving in her own way and the only way she knows how to.

What do you think motivates her?
Honestly, the fact that she’s lonely. She had a slither of hope with Fred and having someone she could rely on, and that smashed into pieces. She tried with June, and I think June might have tried with her as well. She’s so lonely and so devastated by the fact she has no one. She will go to great lengths to sabotage. 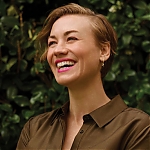 A week after sending an audition tape for an American dramedy, Chuck, in 2007, Australia-born actress Yvonne Strahovski received a call saying she’d landed one of the lead roles, a CIA agent, in the pilot. She booked a round-trip flight to Los Angeles but would never use the return ticket.

“Lo and behold, one thing led to another, and that was that. Here we are 14 years later,” says Strahovski, 38. Her career can be described as a steady trajectory of success, including The Handmaid’s Tale — season four wraps June 16 — and The Tomorrow War, which marks her first starring role in a big-budget popcorn pic. In the film, out July 2 on Amazon, Strahovski brings Sigourney Weaver-esque nerves of steel to her role (opposite Chris Pratt) as an alien-battling scientist.

Strahovski — who followed Chuck with a turn on Dexter as the titular serial killer’s girlfriend — largely eschews the Hollywood spotlight. “I just love the outdoors and camping,” says the actress, adding that she and her husband and their young son “took some of the best family nature trips that I’ve ever had” during pandemic-induced downtime.

It was her casting on Hulu’s Handmaid’s Tale that garnered the actress her first Emmy nomination (in 2018) for her star turn as the villainous but complicated Serena Joy Waterford, who finds the tables flipped on her in the latest season. “Serena is definitely villain-flavored but with a twist,” says Strahovski. “It’s always been interesting to watch June [Elisabeth Moss’ character] and Serena in opposition to each other. They are two women living in an oppressive society at opposite ends of the spectrum.” And that’s set to continue when Handmaid’s returns for season five.

In building her career, “I’ve really fought for the opportunities that come about where I’m not pigeonholed. I’m thrilled with the sort of scope I’ve been given,” says the actress, who starred last year in the Australian limited series Stateless as a woman unlawfully detained under Australia’s controversial mandatory detention program for all non-citizens without valid visas.

Growing up, Strahovski made home movies as a tween with her dad’s camera — her parents were Polish immigrants — and starred in high school plays before attending the Theatre Nepean, an actor-training institution at the University of Western Sydney.

The calm, collected actress isn’t worked up over the fact that The Tomorrow War isn’t getting a big-screen release. Paramount and Skydance were set to open the sci-fi epic in theaters last year but had to delay its release because of the COVID-19 pandemic. In the meantime, Amazon Studios picked up the movie in a megadeal valued at $200 million.

“So much has evolved during the pandemic. In a lot of ways, it might actually have more eyeballs on it because people can watch it at home,” she says. “I feel like people are really aching for something of this kind of movie that has such an old-school kind of super action. We’ve been in isolation for the past year, and there’s this cool theme in the film about all of us coming together and standing up for one common goal, which is a really cool parallel between what we’ve been all experiencing in real life.”