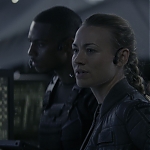 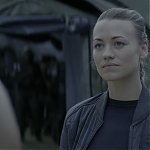 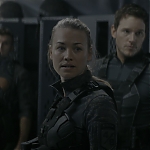 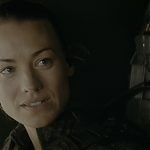 When it comes to her new film The Tomorrow War, Yvonne Strahovski was hooked from the start.

“I thought the script was such a page-turner when I first read it,” the Handmaid’s Tale and Dexter actress tells EW. “And I just loved the way that [my] character was such a surprise.”

Directed by Chris McKay, the sci-fi actioner follows Chris Pratt’s Dan, a veteran and high school teacher who gets recruited to fight a war in the future against an invasive alien species that’s decimating mankind. Strahovski plays a brilliant military scientist from the future codenamed Romeo Command, who is charged with creating a biological weapon to destroy the enemy extraterrestrials. In other words, the fate of humanity pretty much rests in her very capable and combat-ready hands (no pressure!).

Ahead of the film’s Friday release on Amazon Prime Video, Strahovski dished about why her character isn’t your typical badass, what it was like fighting aliens, and why she wished she’d gone to the gym before production started.

ENTERTAINMENT WEEKLY: Your character has a lot going on: She’s a fighter, and she’s also a scientist kind of in charge of making sure the world doesn’t end. How did you prepare for a role like that? Was there a lot of training?
YVONNE STRAHOVSKI: We definitely had some military training, just in terms of being able to handle the weapons, because there were certainly a lot of them, especially for me. So we definitely did that. I probably should have gone to the gym or something a bit more — or at all — before I did this movie, I’m not sure that I anticipated doing that much action. [Laughs] But I’m so thrilled. I loved being back in that action space. It’s such a great part, and it’s really fun to get back into it and do some really cool stunts and just play and get physical.

You in particular had some very up-close and personal scenes with these aliens. How did you film those, and what was that experience like?
Typically, we would do three different takes for the same kind of shot. So you do a take with nothing at all and just kind of pretend that there’s something there. And then you would do the take with the person in the gray unitard. And then you would do a take with a prosthetic. They built a prosthetic of the top half of the alien, so the head and the front legs that was controlled by guys basically puppeteering it from behind. I thought it’d be easier to have someone there or the prosthetic alien there, but I actually really enjoyed doing it to nothing. I think I found it very freeing to just sort of be able to use your imagination and just kind of create something.

So many of your scenes take place in this really cool futuristic lab. How much of that was actually built?
That whole set was pretty much built. Yeah, that was in a studio. It was all done. It was incredible. Yeah, they did an incredible job with the whole lab, in the inside of the lab, and in that area where the alien ends up in. And the rest, you know, the exterior was power plants.

The sets were great. It feels like a big summer blockbuster movie.
Yeah, it definitely was. And I think it’s a special one just because of how it has that really beautiful family thread through it that grounds the movie, even though it’s got all this amazing action and aliens. It’s got all these surprise elements within it that I’m not sure that audiences are expecting.

Your character is so interesting too, because she doesn’t hesitate at all. Even in the face of certain danger, she just straps in, takes charge, and gets it done.
Yeah, I like that about her too. There’s so much bubbling under the surface there. She does totally put [worries] away and she puts her brave face on and faces the unimaginable. But she also faces her heart and her inner demons, which was what was so compelling to me about the character and what I really liked. She isn’t just like an action hero badass, there’s this really great grounding element to her.

Do you feel like after the last year we’ve all had, a film about the end of the world plays differently?
Yeah, I think it definitely plays differently in the sense that we’ve all been in this pandemic and isolation from one another, and humanity, we’ve all been in this one pandemic boat. There’s a theme in the film of humanity kind of coming together for one common goal and how we handle that. I mean, obviously the end of the world is a little more extreme, but still, we’ve all been living in a very extreme situation. So there’s definitely some really interesting parallels.

What do you hope the audience gets out of the film?
I just hope they have a great time. This is like, grab your loved ones, your family, turn the lights off, and get your popcorn out and just enjoy the ride. I think this will take people places that they’re not expecting, and it’s just fun. It’s wild. I think people are ready for [summer blockbusters]. People want to see something like this. It’s time. 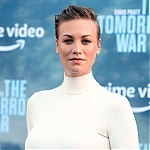 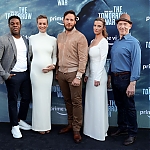 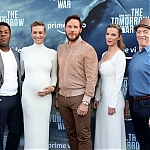 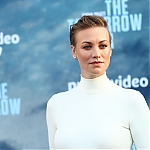